[vc_row][vc_column][vc_column_text]On 23 May 2020 the UBUNTU mission entered its second phase.

This time, in addition to Istmina, 13 parishes of the diocese of Istmina-Tadó – located on the river San Juan and the Pacific coast of Chocó – were supported by our team in the fight against the corona virus. The aim of the mission was to train the health personnel, even in small medical stations, so that they are prepared for the strong outbreak of the pandemic, as well as to provide them with additional medical equipment. 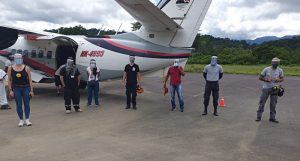 Already in the first phase of the UBUNTU mission, we used the donations of our supporters specifically for better patient care and were thus able to provide the Eduardo Santos Hospital in Istmina with the necessary medical equipment. In phase 2, especially more remote communities have now received medicines, consumables and other medical equipment that were urgently needed for patient care and can prevent unnecessary travel to the city by land and water.

The result? A complete success! Together we have managed to train 180 health workers from 13 Chocó communities in basic techniques such as advanced CPR. In addition, 55 community leaders were trained in preventive measures on COVID-19 and general first aid with a focus on cardiopulmonary resuscitation (CPR). Drugs and hospital supplies were also delivered to 11 medical stations and 4 hospitals in the San Juan region and on the Pacific coast of Chocó department. For the implementation of the second phase of our mission we were able to win Adveniat as a strong partner in Germany and in Colombia, as in the first phase, we worked closely with the diocese of Istmina-Tadó and Salamandra, the international training centre for emergency and disaster relief. 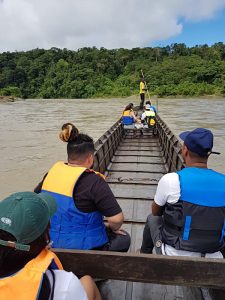 Each phase was marked by challenges, but also by a lot of unforgettable stories. A particularly exciting one is that of our trip to Sipí, a small village on the San Juan River. The boat was suddenly damaged and our team was stuck for several hours. In the meantime, however, it had rained so heavily that the river flooded the entire road and the rescue team could not reach our team. Spontaneously everyone jumped into the water and swam to the other side of the river, where they were finally picked up by another car. This is just one of many stories, which above all reflects the great personal commitment on site.

With the UBUNTU mission, we have been able to support the health system in Chocó with important donations in kind and training – and this beyond the emergency caused by COVID-19. This is particularly important in places that are very difficult to reach and therefore have a relatively poor medical infrastructure.

At the end of the second phase, we would like to take the opportunity to thank all the people involved, but especially our team of paramedics and Doctor Quintero, for their invaluable and tireless work. At the same time, we are very pleased that a third phase, which is aimed particularly at the population and prepares them for a new form of coexistence with the virus, will start in the coming weeks.

We at CASA HOGAR hope to be able to continue to make a contribution and in this way support the Chocó region.

If you too would like to support the continuation of UBUNTU’s mission in Chocó, we would be happy to receive any donation, no matter how small it may be!