Food support for women and their families in times of Corona 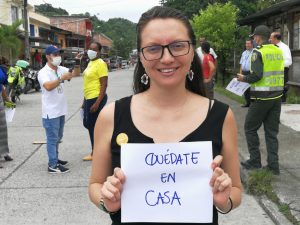 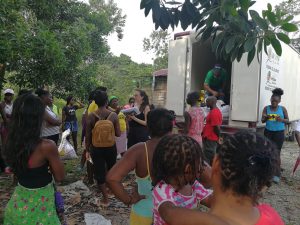 The corona pandemic did not stop at Colombia either. A nationwide quarantine has been in effect there since March 24, during which the population is only allowed to leave their homes for essential purchases and visits to the doctor. For the time being, the curfew has been ordered until April 13th. However, it is possible that it will be extended (update April 7, 2020: national quarantine extended to April 27, 2020). The Colombian government reacted to the steadily increasing number of infections in the country. In the Chocó region, where CASA HOGAR operates, no cases have been documented so far. But that doesn’t have to mean anything: tests have to get to Quibdó, the capital of Chocó, via inadequate roads and flown from there to Bogotá. However, there is no suitable transport material for the samples, and flights have currently been canceled. But even while the country is preparing for an uncontrolled outbreak of the virus, the consequences in Chocó are already staggering.

84% of the population in Chocó work in the informal sector and the majority of them live from hand to mouth. The measures to contain the virus have not only more than doubled food prices in some cases, but they also mean that all the people in the informal sector are no longer allowed to cook, sell fruit, repair shoes, drive taxis on the streets for others. There is no savings, health or unemployment insurance. Single mothers who make up 40% of the Chocó are particularly affected by financial losses. Not only are they responsible for their children, but they must also look after older family members. For them, a day without income means a day without food – for the whole family.

So they are faced with a decision that nobody should be faced with: stay at home and starve or accept the risk of infection, the spread of the virus and a fine for a meal. Many of them would “rather die of flu than starvation”. But despite everything, they still have hope: that the virus that everyone is talking about won’t hit them quite so hard, that they will get through this crisis together and that everything will soon return to its normal state. How long the people in Chocó can endure this condition, nobody knows.

But CASA HOGAR cannot just hold out and look the other way. In close cooperation between the teams in Chocó, Cali and Germany, a project has therefore been started to support families in Chocó who are faced with the decision “hunger or infection” due to the precautions and consequences of Corona.

Project objective: The project is aimed at families who “normally” live from hand to mouth, have no savings and do not receive any state aid. With the help of food parcels, they should be able to really spend times of quarantine and isolation at home and thus reduce the spread of the virus. The primary target group are single mothers who have to pay for their children and their parents’ generation. The families live in Istmina as well as in remote rural areas. In the countryside, the need is exacerbated as there is currently no public transport connection with the city and at the same time no relief supplies are getting there. The project is handled by our project partner Fundación CASA HOGAR Istmina and carried out in close cooperation with local committed people and authorities. This ensures that the measures really reach those who cannot be reached in any other way.

Location: Istmina and the rural part of the Chocó

Project completion: project start immediately (end of March 2020)! But the project can only be the beginning. More projects will have to follow. We are in constant contact with the local people in order to find out about the acute and long-term needs in Chocó and – when and as possible – to provide support.

Donate to CASA HOGAR help that it does not have to stop with one-off actions and that we can all weather the crisis together.