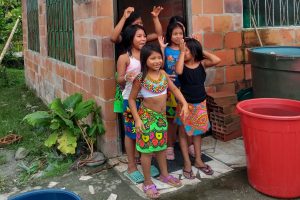 The hostel „Casa Hogar Niña María” is intended to provide a safe and secure home for 20 girls (and 40 in the long term), so that they can live in a safe environment while graduating from Colegio Diocesano.

The young residents are girls coming from remote areas without access to further education. In the hostel they are supposed to be offered safer and calm living conditions, giving them the chance to visit school without having to worry about daily survival under conditions that are not suitable for children. In the sheltered environment of the CASA HOGAR hostel, the girls are meant to be able to develop freely and become strong women who will help drive social change in Chocó. The hostel „Casa Hogar Niña María” is not located on the same terrain as Colegio Diocesano San José but very close to it.

The construction of the hostel is the first project of CASA HOGAR and is being carried out in collaboration with the diocese of Istmina-Tadó, which povides the land for the hostel, the Colegio Diocesano, which grants the girls living in the hostel a scholarship for a free school visit, and the congregation of the Misioneras Siervas de la Presentación, which sends religious sisters who take care of the hostel, giving the girls a feeling of home.

Construction began in spring 2016. Unfortunately, shortly before completion in spring 2017, structural defects were found on some columns due to construction errors, making the current house uninhabitable. Since January 2018, the diocese has therefore provided a smaller house for free as compensation until a safe solution for the house has been found. For this reason only 5 girls currently live in the house. However, we hope that soon 20 and in the long run 40 girls will be able to live and learn carefree in Istmina. (As of August 2019)

Costs: The analyses and cost estimates for a safe solution for the construction of the hostel are currently in a phase of further development.