EXTENSION OF THE BREAK TIME AREA 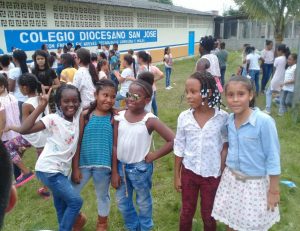 enables the more than 200 pupils to play outside, protected during breaks and free hours, in addition to concentrated learning, without any danger from the passing street and without disturbing other classes during learning.

The Colegio Diocesano had only one inner courtyard as a break time area, which was directly visible and above all audible from all classrooms. Apart from the fact that the inner courtyard cannot be used as a break yard during lessons, it also no longer offers sufficient space during general breaks due to the increasing number of pupils. The space in front of the school could not be used because of the directly passing street.

The project aimed to build a wall to separate the area in front of the school from the street and from the neighbours. This has created a new break time area that allows undisturbed and safe playing in breaks and free hours.