The Chocó region is marked by poverty and widely dispersed communities lacking access to secondary education. Poor families are often confronted with the following reality: They can keep their daughters home following traditional structures or send them to stay with “acquaintances” in the city to attend school. When sent on their own to the city to stay with acquaintances, however, the girls are often (sexually) exploited and don’t have time to attend school. At the same time, they are exposed to other dangers in a city far away from the support of the family. These dangers include, e.g., the influence of seemingly helpful illegal groups as well as unwanted pregnancy in childhood and adolescence.

For this reason, CASA HOGAR supports the residential home “CASA HOGAR Niña María” where girls of indigenous and Afro-Colombian origin live protected and untroubled in the town of Istmina while attending the Colegio Diocesano San José school on a scholarship. All girls in the residence are of poor origin and come from remote areas of the Chocó without access to schooling and with omnipresent danger of displacement and forced recruitment by illegal groups.

CASA HOGAR Niña María wants to be – in the true sense of the word – a “hogar” (home) for its residents: a place where they can find affection, understanding, light-heartedness and a second family. A safe place where the currently 12 girls can receive curricular and extracurricular education so that they can later use the skills they have acquired for themselves, the Chocó and their home communities.

Who takes care of the girls in their residence?

The nuns Sor Belkis and Sor Elena are responsible for the implementation of the project and have been involved from the beginning. Without them, the whole thing would hardly be possible. With dedication and patience, the nuns accompany the girls’ development.

In addition, the girls are assisted by a tutor who helps them with their studies. This is important because most of the girls have not received adequate schooling in their home communities and Spanish is not their mother tongue.

But not only the nuns and the tutor are there for the girls: More than 15 volunteers in Istmina take care of them. They celebrate each of the girls’ birthdays, organize parties for Halloween and Christmas, provide school supplies and clothing, and take the girls to the movies. 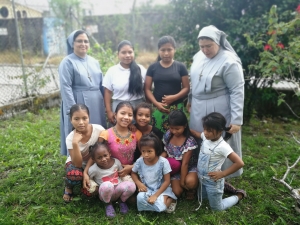 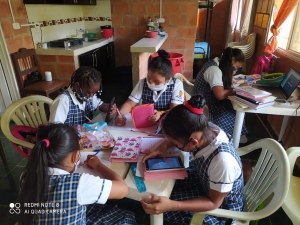