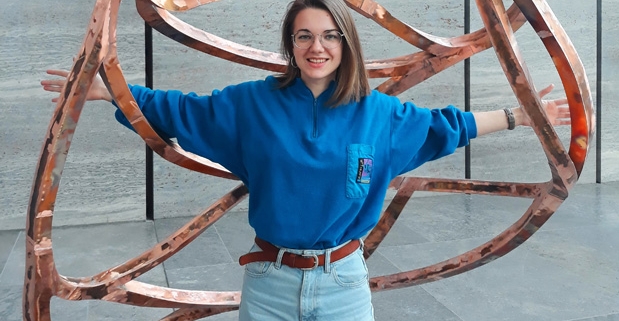 Since January 2021 Georgia Dreßler (25) supports the TEAM of CASA HOGAR as an intern. Here we introduce her.

Dear Georgia, welcome to CASA HOGAR. We are very happy that you are supporting the team as an intern. What can you tell us about yourself?

I am originally from Halle, Germany, where I am also enrolled in a Master’s degree program in Hispanic Studies. Before that, I completed a Bachelor’s degree in Translation at the University of Leipzig, which means translation and interpreting in English and Spanish. I have been an intern at CASA HOGAR since the beginning of January.

How did you hear about CASA HOGAR?

A friend in Leipzig told me about CASA HOGAR. I thought to myself: Wow, that sounds like a great project! For one thing, the topic of education appealed to me. Education is one of the most important tools we have to shape our own path in life. Of course, this is especially true in regions as conflict-ridden as the Chocó. On the other hand, I was motivated by the fact that CASA HOGAR is committed to the advancement of women. I found it particularly exciting to combine these two aspects.

How did you get the idea to apply for an internship at CASA HOGAR?

For many years, I have been trying to pay attention to sustainability and solidarity as much as possible in my private life, and it has become increasingly clear to me that I also want to move in a direction that contributes to the common good in my professional life. During an internship at CASA HOGAR I can gain valuable experience and inspiration for my future. The fact that CASA HOGAR just happened to be looking for an intern was of course a wonderful fit.

Did you already have contact with Latin America or the Chocó before your internship?

I have already been to Latin America a few times: After school I did a voluntary service in Argentina. During my bachelor studies I was in Chile. From there, I also flew to Colombia and traveled the country for three weeks. Since then I know: I want to get to know Colombia even better! Thanks to the internship at CASA HOGAR, this is now possible – even if it is from Germany.

What skills and talents can you bring to CASA HOGAR?

In addition to my knowledge of Spanish, my experience in the media sector is certainly relevant. Parallel to my studies, I have been active for several years at the university radio station, presenting programs and editing contributions. I’ve also been earning money as a freelance writer on and off. I think it would be great if I could also support the public relations of CASA HOGAR during my internship.

You have been on board for a few weeks now. What have you mainly been doing so far?

Mainly with administrative tasks. For example, I took care of the donations that came in over Christmas. CASA HOGAR has also just landed a project with public funding. This is a new challenge for all of us, and we are getting to grips with it together. For me, it’s great to be directly involved.

What do you want to achieve at CASA HOGAR?

I really want to be involved in the content of CASA HOGAR’s projects. This way I can see what we can achieve on the ground! In addition, I would love to support the public relations work in order to make the organization more present.

Dear Georgia, thank you for the interview – and good luck with your internship!

Many thanks for your support!

A Chocoana (Colombia) in Germany
Scroll to top